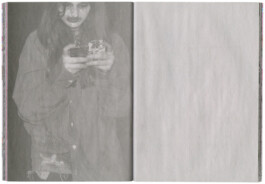 Love With Stranger x Coco explores different tropes of female identity - mixing personas, identities, some parafictional, some actual. The book presents a visual mash up of Coco’s inner compulsions and obsessions through film stills, collages of props, and photographs of the actresses who interpret on her scripts. Throughout making the film, varying degrees of closeness were held with the actresses, including acting as an on-call babysitter for the youngest ‘Coco.’ These relationships are presented in the book and insert the role of director as a quasi-actress, collaborator and character.

The identity of raconteur/protagonist develops further with a diary-style essay about Cameron titled “Love with Stranger.” This essay presents an alternative to the hysteric girl-culture of Coco by introducing Cameron — a figure fully cognizant and in control of her own female identity, and whose own practice explored techniques of imitation and subversion. Following a trail of archival research on the life of Cameron, the study eventually leads to a meeting with Beat poet Aya Tarlow, once Cameron’s confidante. This encounter presents the re-discovery of a text Aya gave Cameron in the 1950s, and which Cameron later read on the radio in the 1970s, in an attempt to “free women.”

Love With Stranger x Coco is a 144 page soft-cover perfect-bound book published by New Byzantium in 2012 in an edition of 500.