COCO drifts betwixt and between states of consciousness and madness – and genre, exploring film Noir confession, sci-fi, skate video and "pale-core". Its ambivalence to definition is predicated by using the possibility of delusion and irrationality as its methodological model. The character Coco, half deluded actress/pop star, half recovering patient, relates her life in the span of what could be one day, while her memory extends the film’s time to include childhood, fantasy, trauma and future aspirations – beyond the time she takes to tell you.

Coco leaves home after her mother decamps with a group of skaters at the mall. Now a suburban runaway, Coco encounters three traumatic episodes, which she later retells in a purgatory-like high-school Show&Tell, where she vies for survival and absolution.  The film revolves around her mother, friends, strangers, her ghost-like classmates, and her own delusions of achieving fame as a pop star.

Coco's sincere and quasi-primordial obsession with girlhood and pop stardom reach dramatic conclusions: where embarrassment, shame and awkwardness are considered as valid strategies for development, inquiry and critique – and, as additions or counterpoints to the available models of hard insincerity, imitation, and eventual appeasement. Where, the sincerity of embarrassment is considered as closer to the truth, closer to reality. In this way, Coco is also a confused, hysterical and visionary character, because, really, what’s reality?

Played by four actresses ranging in age from 3 years old to 40 years old, youth and aging within the film is considered as a coincidence to existence and the progression of time, and in this way inconsequential and non-deterministic. The potential of this (freedom?) is underscored by the production span of the film (4 years, 2009 - 2013) and how the lead actresses age and de-age from one scene to the next, from 3 to 7, from 12 to 16, from 26 to 30, from 40 to 44. The cast is primarily made up of friends, street casting, one method actress and selecting existing relationships into parafictional situations. COCO is presented in conjunction with a book, Love With Stranger x Coco, with a long essay about the artist, poet and mystic Cameron, and with an accessory line, X FILLES. 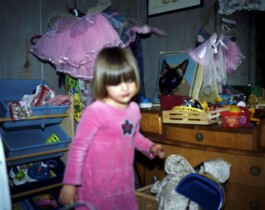